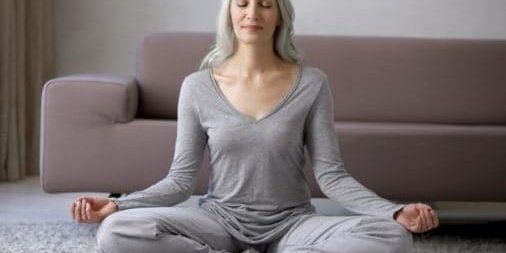 We’ve become a nation obsessed with downward dogs and cat cows. Britons are now spending a staggering £790 million a year on yoga classes. But you don’t have to be a twenty-something in stretched lycra to benefit from it. Increasing numbers of middle aged people – so-called “golden yogis” – are discovering the benefits of the ancient practice.

These benefits are being increasingly proven by science – and arguably, those who stand to gain the most from yoga’s advantages are the over-fifties. Last week, researchers at the University of California, Los Angeles, found a three-month course of yoga and meditation was more effective than brain training exercises for minimising age-related memory loss; another found it could improve sleep in breast cancer survivors who had an average age of 54. It’s also an excellent way to stay fit and supple in middle age: last year, Nigella Lawson, 56, credited her slim figure to practising Iyengar yoga – a slow form of the practice, with a focus on alignment and posture.

When Lucy Edge, 53, a former advertising executive, fell into a deep depression, she opted for yoga instead of the anti-depressants she was prescribed. “I took a six month career break and travelled to India to learn yoga and founded the website yogaclicks.com – the website includes a section called Yoga Meds that lists over 300 clinical trials demonstrating yoga’s benefits, for conditions ranging from arthritis to insomnia to obesity.

“Yoga was so beneficial for my depression, I wanted to tell the world about its joys. But as the daughter of a scientist [Lucy’s late father was Professor Gordon Edge, creator of the Cambridge Cluster] I didn’t want to make mad claims, I wanted evidence and found so much of it for yoga,” Lucy remembers.

Here are some of the ways yoga has been shown to benefit mental and physical health, plus how to get started (lycra leggings optional):

If crossword puzzles and sudoku have been the extent of your memory training to now, it could be time to sharpen up your warrior pose. The recent UCLA research took brain scans and memory tests, comparing the effects of 12 weeks of memory exercises with a course of yoga and meditation on 25 adults over 55. The latter not only had better improvements in their spatial and visual memories, but also more reduced depression and anxiety and increased resilience to stress. “Although this study is small, it suggests that we should be doing more research into the benefits of yoga and meditation as additional ways to keep our hearts and brains in good health as we age,” says Dr Clare Walton of the Alzheimer’s Society.

There’s no need for hours and hours of headstands to benefit. In this study, volunteers did just one hour of Kundalini yoga a week. This is a gentle form of yoga that incorporates breathing techniques, meditation and some chanting of mantras. The latter may feel silly at first but can be easier than other forms of meditation. The study participants also did 20 minutes daily of Kirtan Kriya, a type of meditation involving chanting, hand movements and visualization of light. You can order a copy of a 12 minute Kirtan Kriya mediation CD for $20US from the US Alzheimer’s Research and Prevention Foundation. Find a Kundalini yoga teacher at kundaliniyoga.org.uk

We’re often told to plod the pavement with walking or jogging for the health of our hearts, but a large body of evidence suggests the more gentle option of yoga may be just the ticket. In 2014, a systematic review of yoga and cardiovascular disease published in the European Journal of Preventative Cardiology showed that yoga may help lower heart disease risk as much as conventional exercise such as brisk walking. This is likely to be because yoga reduces stress – a big contributor to heart disease. Stress hormones raise both blood pressure and heart rate, increasing the likelihood of blood clots. “The benefits of yoga on emotional health are well established. It has been shown to help with anxiety, stress and depression, conditions which affect many people who have suffered a cardiac event or have undergone cardiac surgery,’ says Dr Mike Knapton, Associate Medical Director at theBritish Heart Foundation. “Previous research has shown that practising yoga is associated with some improvement in blood pressure, cholesterol and weight, which are all risk factors for heart disease.

In her book The De-Stress Effect, yoga teacher Charlotte Watts sets out a stress-reducing series of gentle yoga poses, perfect for beginners. Another great way to reduce stress is to practice Restorative yoga, suggests Anna Ashby, a senior teacher at Triyoga Studios in London. “Postures are supported with bolsters and cushions and held for up to 12 minutes,” she explains. “This gives the nervous system a break and is like a fast-track to stress reduction.”

Beat back and joint pain

Sarah Shone, a musculoskeletal physiotherapist and yoga teacher, was so convinced of yoga’s benefits that she incorporated classes for the over-50s into her Primary Care Trust’s rehabilitation programme for back pain. A staggering 87 per cent of participants reported a reduction in their pain. National Institute of Clinical Excellence (NICE) guidelines now recommend yoga and stretching as a useful form of exercise for lower back pain. Shone says its benefits go deeper and is now aiming to train more physiotherapists in using yoga in their clinical work with this age group. “The over 50s are the category we’re trying to capture in NHS physiotherapy, to try and treat or even prevent problems in later life such as osteoporosis and arthritis as well as back pain. Its benefits of flexibility, core stability, support, balance and strength have been shown to help those living with chronic conditions.   “Yoga has also been shown to help keep incontinence at bay because it specifically targets the muscles of the pelvic floor, along with other muscles in the body and is weight-bearing so can help increase bone density. Plus, it can be adapted in so many ways to make it accessible for all.”

“If you’re over 50 and just getting started, tell your teacher about any health problems and choose a style such as Hatha or Iyengar that is more gentle, rather than some of the stronger more flowing or ‘power’ versions, at least to begin with,” Shone suggests. “If you have a specific condition such as back pain, talk to your doctor to see if you’re eligible for a course of subsidised yoga on the exercise referral scheme.”

Get flexible | What type of yoga should I try?

June 21st is International  Yoga Day. Find an accredited yoga teacher at websites  such as British Wheel of  Yoga or  yogaalliance.co.uk.  Lucy Edge’s latest book is Down Dog Billionaire (£8.99).

Anna Magee is the editor of healthista.com