Disconnect From the Internet in the Sri Lankan Jungle: The Ulpotha Yoga Retreat 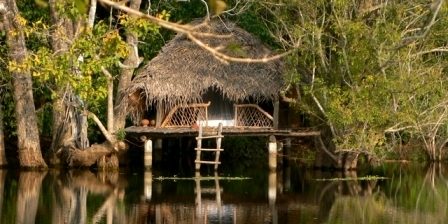 “They come from all over to disconnect. Bankers, CEOs, marketing managers, dancers,” enthused my lively masseuse Marion, as she pulled my naked thigh to a new angle and pressed down. “I think there is a need for a place like this. For people to reconnect to themselves.” Reconnect to themselves while disconnecting from electricity. The Ulpotha yoga retreat in the jungle of western Sri Lanka consists of 11 thatched open-air huts spread out on 22 acres of forest, alongside a lake, with swept red-earth lanes connecting these huts. At night, the lanes glow with kerosene lanterns in the dark, while monkeys howl. There is no electricity nor any wireless connection.

As soon as I stepped on the grounds, I too reconnected — to something I am completely unaware of in Paris. The sense of embodiment on a planet. It is soothing and humbling to be told it is night-time by the setting sun, and not be able to artificially keep going. I watched the strands of orange-yellow sun settle into darkness over the rice paddies, swinging on a hammock, as the night came alive with bird songs.

It was the reason I chose to return to Ulpotha where I spent last year’s New Year’s Eve.

“The reason I chose to come?” explained a fellow retreatee, a British production manager. “Because other yoga retreats seem to be ‘scenes,’ where everyone is competing to be the best yogi. This seemed to be a place.” This week’s yoga teacher is a Cambodian-American expat, Bo Srey, now based in Singapore, who goes around and gently corrects our poses (with his sweetly smiling wife-assistant Shirley) and has — as all the other yoga teachers this retreat hires — studied from East to West. I stretch into a pose, inspired by three limber monkeys passing by the yoga sala in their own version of “down-facing dog.” Bo warns me with a gentle smile not to squish the frog squatting behind the bolsters.

Later the new master yoga teacher, Nigel Gilderson, will lead us up a mountain to Monkey Rock, to teach us to feel the “energy” of the rock in a variety of tai chi movements and yoga stretches. We lie on the sun-warmed granite, arms wide, as the sun sets. A favorite moment: an oil ayuredic massage, followed by an herbal steam-bath under a wicker crate, with spices wafting in the steam. Chandina, the Ayuredic masseuse, washes me in an outdoor stone hot, next to large copper kettle, pouring ladles of warm water over my head and rubbing mungbean grains on my skin. All of the profits from this onsite ayuredic center go to a local clinic. But the most fun part of the retreat are the collective meals, held under the awning of the Ambalama, with abundant gourds of simmering curries of vegetables with names like bittergoard, wingbean and snakegoard, as well as breadfruit, mango, and papaya, along with fresh cucumber salad, spicy tubular roots and colorful coconut sambals (one made with green chili lime, beetroof leaf and penniwort!), most of which is grown on the premises. Guests ladle the food with long wooden spoons, and chat with each other animatedly, sitting crosslegged on the mats. In the mornings, for breakfast, we sit in the tea kadē — a stone hut — while the Sri Lankan woman Nalika pours steaming ginger tea from kettles on burning wood fires, and offers Indian millet cakes wrapped in coconut leaves.

It is a deluxe way to be in the jungle–so relaxing that one day a week there is even a retreat from the retreat: to the Dambulla cave temple for some, and to the beach of Alankuda on the Indian Ocean for others, where a few of us charged off in a motor boat and came across thousands of dolphins, surfing up and down the waves, their fins elegantly in unison. A few baby dolphins did flips in the air.

A fellow client — a circus trapeze artist — helped me perfect my cartwheel in the sand. “Stretch your legs higher!” she said, with a laugh. This is the highlight of Ulpotha, for me: the unusual air of openness and kindness among the guests, fostered by the hostess of the retreat, Suzi, a South African woman who dedicates herself to making sure each guest is introduced to the others and discretely provides for every need. Guests come from all over the world, from Riyadh (wearing a flowing white Dishdasha) to Oslo (in jeans), ready to converse.

Biking along the paths to the local market, passing lily pads on the ponds, I conversed with a Danish young woman about her work with the Red Cross creating social-psychological support for areas in East Africa. Her master’s thesis, on youth programs, actually turned into one in Uganda.

Then back in the tea kadē, for a chocolate coconut snack, I came upon a British Foreign Affairs Officer and chatted about his work on Syria, followed by a conversation with an art historian who organized exhibits between the Guggenheim and the George Pompidou museum in Paris. My kind-hearted hut-mate, rubbing her lip (“I was bit by an ant!” she says, in astonishment) tells me that she is en-route to India, to get prototypes for her boutique. She will be inviting her Indian contractor to spend his honeymoon with her family in Switzerland. He has never been in a plane….

For someone who loves great dinner parties — and meeting friendly down-to-earth people who do interesting things — this place is a dream. “I love it,” enthused an assistant film director, relaxing next to me on a cushion, happy to be here after a grinding schedule on a new Sony picture. “After 12 hour days, I really needed to unwind and be with people where there is no competition, no bullocks, where everyone is positive. Anyone who comes to a place like this is going to be positive.”

I also enjoy being alone, reading on a hammock, with the shimmering green of the grass and trees, and the cormorants over the lake in a pure blue sky. It is a chance–detoxed and de-interneted–to reflect on where I am going next, where I am coming from….. It all ends with a party, replete with local Arack liquor and potent beer. The local villagers who manage this place, along with the South African/Sri Lankan owners, crouch before drums, harmoniums and tambourines and happily regale us with folk songs, something about a man missing his woman (I am told), while the guests dance under the moon, barefoot on the earth.

I spoke to Edgardo, a Chilean exporter of Persian rugs, for whom it is now his fourth time at Ulpoltha.

“But you travel all over the world,” I said to Edgardo, as he radiantly beamed gazing into lantern-lit trees. “Why do you keep coming back here?

“Have you ever found a place like this?” he glowed. “The soul of the place—the nature–these wonderful people here–the conversation. It’s magical! Super! And Suzi—Suzi–” he glowed, pointing at the South African hostess in a silvery gown. “Is the spirit of the place. Such kindness! Here there is luxury that is so subtle you don’t see it at first. This morning, the man taking care of my hut left me frangipani and jasmine flowers on my bed; you can see he poured his love into each petal! And Thierry’s massages: have you ever had anything like them? They cured my back problems. Of course, I come back every year. And will be back next year too.” He laughed. “And I don’t even do yoga.”