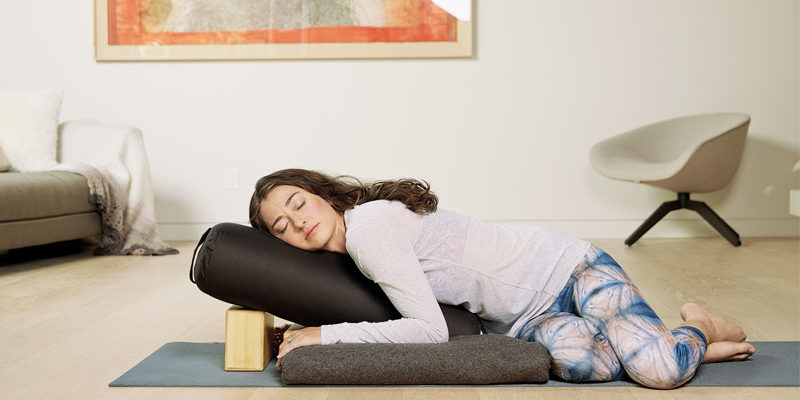 This study gives welcome proof that “high cortisol levels are a known contributor to weight again, particularly in the abdomen, and yoga, in general, reduces cortisol levels”

Though one might think the right yoga practice for losing weight would be an aerobic style, like Ashtanga or a fast-paced vinyasa flow, a recent study showed that the mellowest form of yoga, restorative yoga, can also help people lose significant weight.

Restorative yoga is a practice in which people assume a relaxing pose—like Supta Baddha Konasana or Savasana—while their bodies are supported with props, such as bolsters, blocks, blankets, and straps. The poses are held between 5 and 10 minutes, and vary in intensity of stretch. Restorative yoga has long been touted for its ability to decrease stress, help people heal from illness, and increase flexibility. But the National Institutes of Health study, led by researcher Maria G. Araneta, PhD, MPH, of the University of California, San Diego, found that it also helps people lose subcutaneous fat.

In the study, which took place over 48 weeks, there were two groups of people: one that performed a routine of simple stretching exercises and another that took part in a restorative yoga routine. Both groups lost weight, but the restorative yoga group lost almost twice as much in the first six months, and they were also better able to keep it off. The restorative yoga group also lost more than 2.5 times the amount of subcutaneous fat as the stretch group.

Researchers have not yet concluded why restorative yoga seems to be so helpful for weight loss, but one theory is connected to cortisol, the stress hormone. High cortisol levels are a known contributor to weight again, particularly in the abdomen, and yoga, in general, reduces cortisol levels. So, it may not matter so much what style of yoga you are doing, so long as you are reducing stress while you’re at it.

The fact that restorative yoga helps people lose weight is a good thing, researchers say, because the more aerobic styles of yoga can prove to be challenging or intimidating for someone overweight, and restorative yoga is easily accessible to all.