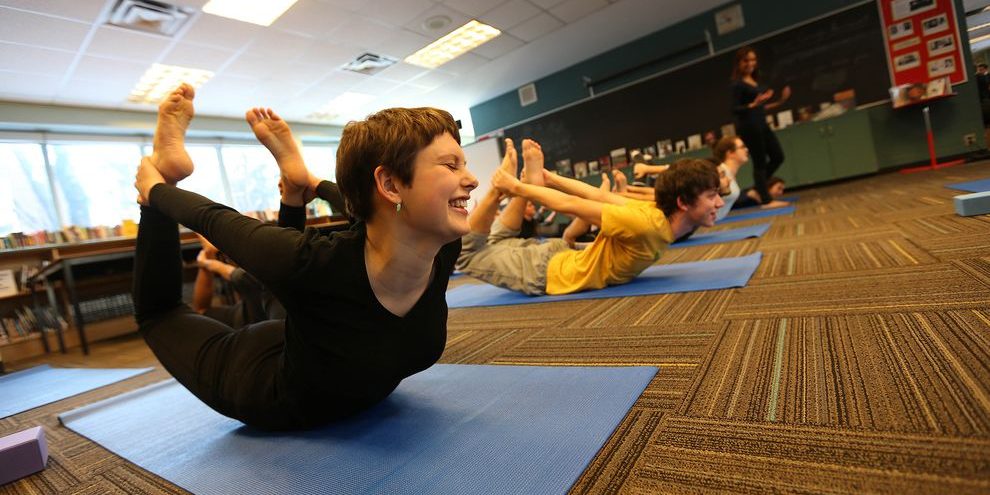 Poses like down dog can bring down levels of inflammation in cancer patients.

Yoga practitioners, like these students in the bow posture, could experience reduced stress and better sleep.

The more we learn about yoga, the more we realize the benefits aren’t all in the minds of the 20 million or so devotees in the U.S. Yoga helps people to relax, making the heart rate go down, which is great for those with high blood pressure. The poses help increase flexibility and strength, bringing relief to back pain sufferers.

Now, in the largest study of yoga that used biological measures to assess results, it seems that those meditative sun salutations and downward dog poses can reduce inflammation, the body’s way of reacting to injury or irritation.

That’s important because inflammation is associated with chronic diseases including heart disease, diabetes, and arthritis. It’s also one of the reasons that cancer survivors commonly feel fatigue for months, even years, following treatment.

Researchers looked at 200 breast cancer survivors who had not practiced yoga before. Half the group continued to ignore yoga, while the other half received twice-weekly, 90-minute classes for 12 weeks, with take-home DVDs and encouragement to practice at home.

According to the study, which was led by Janice Kiecolt-Glaser, professor of psychiatry and psychology at Ohio State University, and published in the Journal of Clinical Oncology, the group that had practiced yoga reported less fatigue and higher levels of vitality three months after treatment had ended.

But the study didn’t rely only on self-reports. Kiecolt-Glaser’s husband and research partner, Ronald Glaser of the university’s department of molecular virology, immunology, and medical genetics, went for stronger, laboratory proof. He examined three cytokines, proteins in the blood that are markers for inflammation.

Blood tests before and after the trial showed that, after three months of yoga practice, all three markers for inflammation were lower by 10 to 15 percent. That part of the study offered some rare biological evidence of the benefits of yoga in a large trial that went beyond people’s own reports of how they feel.

No one knows exactly how yoga might reduce inflammation in breast cancer survivors, but Kiecolt-Glaser lays out some research-based suggestions. Cancer treatment often leaves patients with high levels of stress and fatigue, and an inability to sleep well. “Poor sleep fuels fatigue, and fatigue fuels inflammation,” she says. Yoga has been shown to reduce stress and help people sleep better.

Other smaller studies have shown, by measuring biological markers, that expert yoga practitioners had lower inflammatory responses to stress than novice yoga practitioners did; that yoga reduces inflammation in heart failure patients; and that yoga can improve crucial levels of glucose and insulin in patients with diabetes.

Yoga for Other Stresses

Cancer is an obvious cause of stress, but recent research has pointed to another contributing factor: living in poverty. Maryanna Klatt, an associate professor of clinical family medicine at Ohio State University, has taken yoga into the classrooms of disadvantaged children. In research that has not yet been published, she found that 160 third graders in low-income areas who practiced yoga with their teacher had self-reported improvements in attention.

“Their teachers liked doing it right before math, because then the kids focused better on the math work,” she says. “Telling a kid to sit down and be quiet doesn’t make sense. Have them get up and move.”

While it would be too complicated and intrusive to measure biological responses to yoga in schoolchildren, Klatt has done similar research on surgical nurses, who are under the daily stress of watching suffering and death. She said she found a 40 percent reduction in their salivary alpha amylase, a measure of the fight-or-flight response to stress.

And she’s about to begin teaching yoga to garbage collectors in the city of Columbus before they head out on their morning shift. At the moment, her arrangement with the city is not part of a study. She just hopes to make their lives less stressful. And she does not plan to check their inflammatory response, though she admits she’d love to.