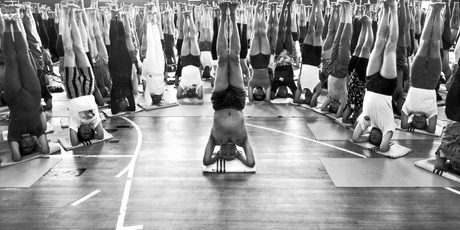 This article is a honest and sincere account of Sylvia Prescot’s relationship with Mr Iyengar. I feel privileged to have been a student of both teachers

BKS Iyengar, who died this week in India, reinvented yoga. A forrmer student of his – and at 91 his close contemporary – celebrates a ‘genius’ of mind and body

I first met Mr Iyengar in London in the summer of 1971. That’s what we all called him then, before the name “Guruji” became fashionable. I had been learning Iyengar yoga for nearly a year, and practising every day, but when I met him that was it. I realised he was a spiritual teacher as well as a physical one.

At the time I was teaching keep-fit classes, which was odd because I was the butt of everybody’s jokes in gym at school. But I had a friend who was in this class and she begged me to join. So I went, and it turned out to be a very good form of keep fit, systematic and sensible. And that started me off on physical things I’d never been able to cope with before, when I was in my 40s.

Yoga at that time was becoming very popular. There was a programme on television about it, and a friend of a friend told me I must try it. She said there was an ILEA [Inner London Education Authority] teacher-training class starting. Silva Mehta was one of Mr Iyengar’s few students in the UK at that time, and she was asked by the ILEA to train yoga teachers. I started doing the class in 1970, in a class of around 25, and I met Mr Iyengar when he came over the following year, during the hot season in Pune.

After that he came every summer. I didn’t find him intimidating. Some people did, but I found him inspiring. There’s a clip in a forthcoming film about him in which he says, “See how many students I have in spite of my wild nature?” He did have a wild nature; he was quick, and could be sharp, but I never felt it was a personal thing – it was always so you could understand better what you were doing. I’ve seen teachers in other fields who have got cross or irritated when people didn’t understand. I felt he could just get a bit impatient if you couldn’t get it, and there was a tremendous affection for everybody, and for the subject, and that outweighed everything else. There was never any doubt in my mind that I was going to go on with yoga.

Once in those first few years he went to Bristol and gave a public talk, and my parents went to hear it. There were questions at the end, and someone asked, “Why do you practise yoga?” Mr Iyengar thought for a few moments and then said: “Because I want to make a good death.” That made such an impression on my father, who was then in his 80s. He had such a positive attitude.

I didn’t go to Pune for the opening of the Iyengar Institute in 1976 because my mother was dying, but I went the following winter, and then most years after that – probably around 20 times in all, for around a month each time. Those trips became part of who I was.

Before I went I tried to imagine India, and I pictured mud huts. Then, of course, we arrived in Bombay, and getting out of the plane was just amazing. The heat came at one like a wall, and the smell of smoke, because we arrived early in the morning and everyone had little fires, all the workers in the airport and so on. And there were skyscrapers! Mehta, our teacher, was with us. She had a friend with a flat in a skyscraper with a beautiful view overlooking the sea. We arrived at the weekend, and Mr Iyengar used to teach classes in Bombay on Saturday and Sunday, so we went to the classes and then took the train with him back to Pune.

We had a room with six or eight beds and a bathroom, a worktop, a sink and a little grill. Upstairs was the yoga hall. Mr Iyengar taught a class every day, for two or three hours. Sometimes there would be an asana [poses] class in the morning and then a pranayama [breathing] class in the late afternoon, or a separate class for sitting poses, forward bends or something. There would be local classes going on at the same time, and Geeta or Prashant [Iyengar’s daughter and son] might be teaching those, but he would very often be there. Right up to this year or last, he was often in the asana hall while classes were going on, doing his own practice. Very often somebody else would be teaching and he would interrupt, and say: “Don’t do it that way, do it this way.”

Sometimes we went on trips to see the caves and did a bit of sightseeing; or went to Bombay for the weekend and did the classes there and saw friends and had tea in a hotel.

Classes were always different depending on the class, on him, and on the weather. Sometimes he might have decided to do something but then change his mind. In the first couple of years it was more intimate because there were fewer people, but even then it wasn’t “tell me about your life and what’s worrying you”. I felt he knew what he had to give, and that there was really no point in getting into anything that might interfere with that. I never felt I wanted anything other than what was being given.

Being corrected in a pose by him was totally different from being corrected by anyone else. I can still feel what his touch was like, and it was just magic. Sometimes people who didn’t know him, or people who like gentle, easy yoga – you know, do something for three minutes and then lie down and have a rest – said Mr Iyengar was horrible and that he hit people. It’s true he might give somebody a slap, but that slap would wake up that part of the body so you didn’t forget it. He was extraordinary, a genius; there’s no doubt about it. But his teaching was not for everyone. Different students need different teachers and different teachers find different students. It’s very strange and fascinating.

It’s hard to define his contribution to yoga. People often identify it as the use of props – things that can help you understand how the body works, and how it connects with the mind – the belts, blocks and ropes he used in classes. That is certainly something he did in a big way, but it’s not the only thing. The important thing about the aids – the supports that help one get the posture – is that when one gets into the right posture, or something closer to it, something happens to the body that has an effect on the mind, and that’s the alignment and the balancing of different parts of oneself. It’s what he was, not what he did, and it’s more a spiritual and psychological matter than a logical one. As he got older he talked and wrote more about spirituality, but he never did to begin with. Light on Yoga [Iyengar’s 1966 bestseller] was 90% physical. The spiritual side was implicit.

Recently I was looking at a bit of film in which he is adjusting somebody in a headstand, with ropes around their legs. In 90% of people, the leg is not in correct alignment – the foot, the shin, the knee and thigh are not aligned correctly, which of course can lead to damage. In the film Mr Iyengar was teaching an assistant how to tie wooden rods into the ropes so they pushed this student’s shin bones in such a way that she understood she needed to turn her kneecap out.

But it’s not all logical or rational. Sometimes when I started teaching yoga, I found that my hand would go to touch somebody in a particular place, but I wouldn’t know why. He had that sense to the nth degree. I occasionally got a little flicker of it and I’m sure most people who practise and teach Iyengar yoga get something of it, too. I think he inculcated it into people in some way, but it’s very hard to put into words.

Not everyone in that first group I was part of went on to work as an Iyengar yoga teacher. Some students invented their own yoga – that’s a great trick, to invent your own yoga! Some people imitated Mr Iyengar and are still imitating him to this day, and some people didn’t know how or why, but they just did it. That’s what happened to me, and I know other yoga teachers who are the same. It’s not a question of learning how to teach, but of understanding what you’re doing.